Home > 📔 Informational > Modafinil vs. Adrafinil: Here’s Why You Should Avoid Adrafinil

Modafinil vs. Adrafinil: Here’s Why You Should Avoid Adrafinil

Modafinil and adrafinil are both popular smart drugs. They increase focus and concentration and can make us feel alert and vigilant.

Students, business executives, and freelancers alike all use these medications to boost their productivity and work efficiency.

These compounds are closely related, but there are some key differences you should know about. 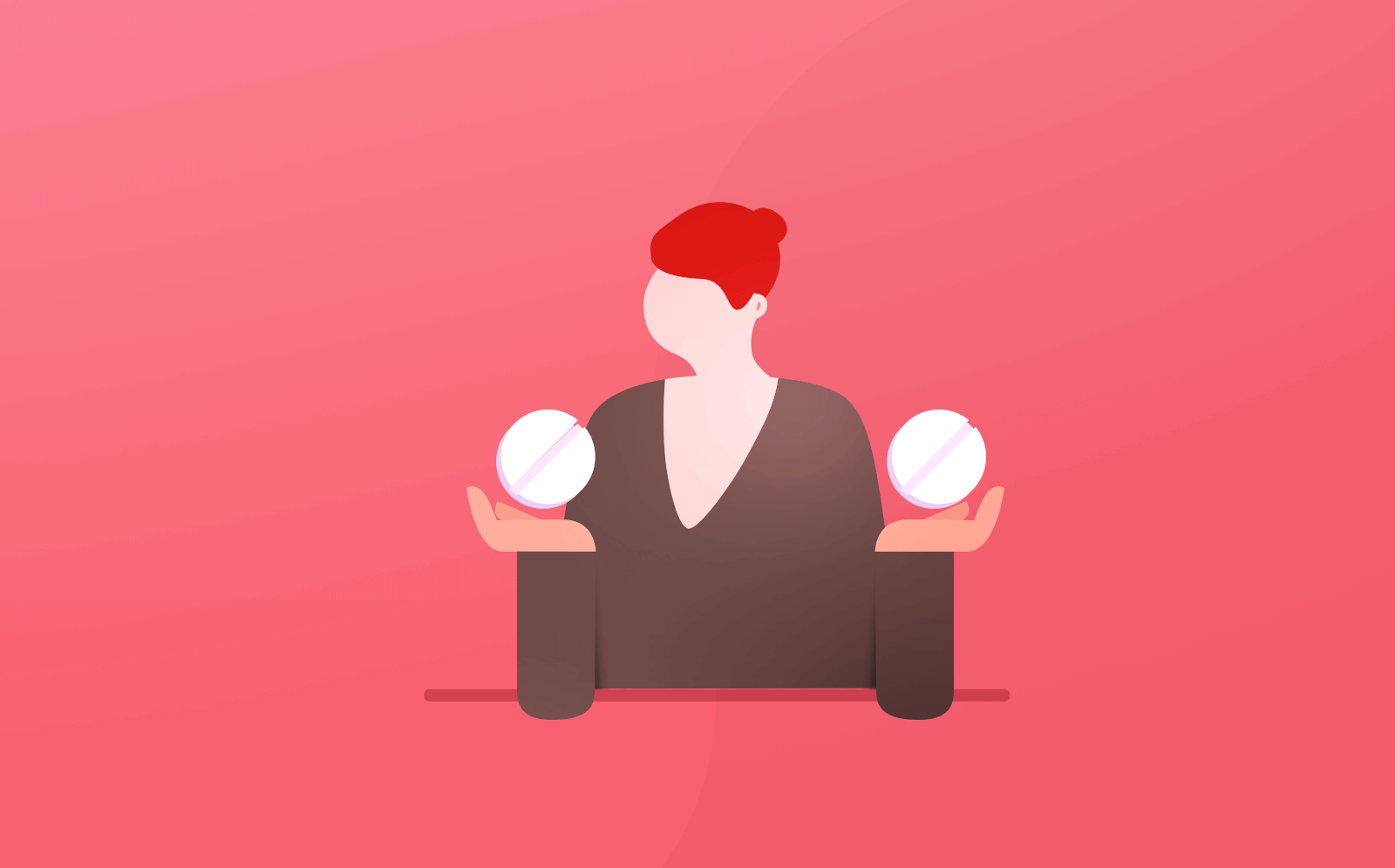 Here we discuss what adrafinil and modafinil are, how they compare, and what important differences you need to know about to make an informed decision.

Today, modafinil is one of the most popular pharmaceutical smart drugs on the market.

It’s actually just one of three compounds all closely related in the same group, the afinils.

The first iteration of the drug is adrafinil, which was invented sometime in the 1970s in the lab of a French pharmaceutical company called Laboratoire Lafon.

After discovering the compound was able to increase the waking state of mice, it drew the attention of a then prominent sleep researcher named Michel Jouvet.

He further developed and tested the dug alongside Laboratorie Lafon and helped build anticipation for the drug thanks to his celebrity status among sleep psychology and neurology at the time.

The compound was released in 1994 in France, and four years later in the United States and the rest of the world.

It was initially sold under the brand name Olmifon.

Researchers at Lafon remained hard at work investigating more of the subtleties of the drug. They eventually discovered that the active ingredient, responsible for its many effects, is a metabolite of the drug, not the adrafinil itself.

Armodafinil has kept me up during all-nighters like no other stimulant. I feel extremely energized after taking it, and usually, my appetite decreases as well. I don't always feel the "motivation" aspect that people talk about, but I guess that's just more of a mental thing. For those new to Moda’s, I’d take a half of both the armodafinil and modafinil in the morning and another half of each at lunch.

This is referred to in pharmacology as a “prodrug,” a drug that needs to be metabolized by the liver before it becomes active.

Lafon researchers then decided to isolate the pure active metabolite, modafinil, and turn it into a drug of its own. They called it Provigil®.

Modafinil showed colossal improvement on the previous design— it was more potent, delivered its therapeutic effects much faster, and the effects lasted much longer. This meant that the newer version came in a smaller dose.

The drug was a hit—selling a few hundred million tablets in the first couple of years.

Since this time, Laboratorie Lafon was bought for $450 million by the large American-based pharmaceutical company, Cephalon Inc.

Cephalon used their reputation and financial backing to boost drug sales even further. The primary goal of buying the company was to get the exclusive rights for what they believed to be the next blockbuster drug, Provigil®.

They liked that the drug had the same effects as the already popular amphetamines but without the side effects.

Provigil® was a huge success, resulting in billions of dollars worth of revenue over the next several years.

Armodafinil is the next generation of the drug.

Let’s use our hands as a metaphor for how these compounds are different.

Let’s say you’re hitting a button, the right or left hands can both do this effectively. However, one will always do it better (your dominant hand).

Modafinil is the same, one of the enantiomers is better at hitting the buttons (receptors) in your body.

Researchers at Laboratorie Lafon noticed that the R-modafinil enantiomer was the dominant version.

This is what lead to the development of armodafinil. It only contains pure R-modafinil, rather than both the S-modafinil, and R-modafinil found together in modafinil. They called this new product Nuvigil®.

Armodafinil is stronger than modafinil and comes in a different dose to reflect this.

Instead of the standard 200 mg, armodafinil comes in a standard 150 mg dose.

Buying modafinil and adrafinil is easiest through the use of online vendors — it can also save you a ton of money.

Places like ModafinilXL.com offer significantly discounted rates on their modafinil. (TIP: You can get another 10% off if you use the discount code ENJOYMXL10 during checkout).

Instead of carrying the expensive brand name products like Provigil® and Nuvigil®, most online vendors supply generic versions of the drug instead.

These generic medications are the same as the brand name products but cost significantly less.

If you are a beginner in nootropics and want to get modafinil online, you need to research in detail the process of ordering this smart drug in your country.

Adrafinil can instead be bought from places like Amazon.

The Similarities Between Adrafinil & Modafinil

Modafinil and adrafinil have a lot of similarities. This is because the effects they provide are the result of a single chemical, modafinil.

Similar Benefits of Modafinil and Armodafinil Include:

Of course, these similarities aren’t a surprise when you consider how closely related the compounds are.

What’s more important isn’t how similar they are but how different they are.

The differences will highlight our reasoning behind saying that you should avoid this compound and stick to modafinil.

The Differences Between Adrafinil & Modafinil

Although adrafinil and modafinil have a lot of similarities in the effects they produce, the way function is very different.

Here’s the fundamental difference between modafinil and adrafinil:

1. Adrafinil is a Prodrug

Adrafinil, as mentioned, is NOT the active ingredient. It needs to get processed by the liver before it starts providing benefit. We call drugs that behave like this “prodrugs.”

Some Other Examples of Prodrugs Include:

Prodrugs differ from other drugs because they tend to take longer to become active, but also last longer in their effect profiles.

This is desirable with medications like Aspirin, Prednisone, and Codeine because it means that they provide pain relief for extended periods of time.

With adrafinil, however, this isn’t always a good thing, which leads us to the second main difference…

This may seem like a good thing, but the half-life of the active metabolite, modafinil is already very long. It the drug takes too much longer to break down it can cause side effects stretching into the early hours of the night… the most common of which is severe insomnia.

This is the most common side effect reported with adrafinil. Since the drug needs to first be converted to modafinil and modafinilic acid before the body can start eliminating it, the effects can last a very long time; and not in a good way.

We still need to power down at night to recover and prepare for the next day.

With modafinil, the length of time is perfect because we can take it in the morning and still have enough time to metabolize the drug and sleep at the end of the day.

With adrafinil, you would need to wake up extra early to take the drug, or risk not being able to fall asleep at the end of the night.

Being a prodrug— adrafinil needs to be activated by the liver.

During the “activation” of adrafinil, the liver metabolizes it into two compounds, modafinil, and modafinilic acid.

The metabolism rate is roughly 50% of each.

Modafinilic acid does nothing for the body and will circulate the bloodstream for a few hours before being filtered by the kidneys and eliminated from the body.

This means that half of your adrafinil dose is simply wasted. You need to take double the amount to get the results you want.

Modafinil and armodafinil go straight to the point.

They don’t need to be metabolized to become activated the same way adrafinil does. This allows them to be significantly more potent than adrafinil at the same dose.

4. Modafinil Peaks Much Faster Than Adrafinil

The adrafinil molecule has a half-life of about an hour. This means that it takes 60 minutes for half of the adrafinil to be converted into modafinil (which then takes another 15 hours).

The time it takes to metabolize adrafinil means it takes longer for it to start producing effects on the body.

Peak effects usually show up between the 3 and 5-hour mark, which is a very long time.

This is more than half the average work day.

If you took adrafinil right as you got to work, let’s say this is around 8 am. The drug wouldn’t reach its peak until around lunchtime!

Modafinil, on the other hand, takes about one hour to get into the bloodstream and reaches its peak after about two hours. As a productivity tool, modafinil is much more reliable.

5. Adrafinil May Damage the Liver

This is the most important difference.

While adrafinil is metabolized by the liver, it can cause damage to the functional hepatocytes living there. There have been some reports of the drug causing liver damage after repetitive use.

Although this hasn’t been officially proven, it’s better to go with something like modafinil that’s been shown to lack liver toxicity.

On top of this, the drug company that invented it, Laboratorie Lafon (now owned by Cephalon Inc) discontinued the drug in 2011 due to superior generations already available (modafinil and armodafinil).

This is a positive benefit for adrafinil but makes very little difference in terms of buying the drug.

Some people still use adrafinil because it doesn’t have the same restrictions as modafinil.

You can even buy it on Amazon.

However, modafinil isn’t much harder to buy.

Here’s how to do it.

MXL and other vendors sell modafinil from places where the legislation doesn’t restrict the sale of modafinil to the public. This allows users to buy the medications online using credit cards or Bitcoin, and have it shipped to their address as usual.

Adrafinil or Modafinil, Which One Should You Choose

So which one should you choose?

Although adrafinil is slightly easier to buy because of differences in legislation, overall, modafinil and armodafinil are going to be superior products.

They both produce the same effects but modafinil is going to do it faster, stronger, and with fewer side effects than adrafinil.

Even the manufacturer chose to stop producing the drug in favor of the newer generations available. If anybody knows the product best, it’s them.

Looking for a seller?
Locate the best modafinil vendor
📔 Informational