Originally intended for treating narcolepsy or other sleep disorders, Modafinil quickly gained traction as a wakefulness-promoting drug used by all types of personnel – from military to factory workers.

It’s a highly potent cognitive enhancer that has been sweeping over Silicon Valley professionals and students seeking to boost their performance. Phenibut is known to treat anxiety and depression as well as used as a recreational med for other purposes like attaining “positive feelings”.

It’s usually mixed with other substances to enhance this effect. How about Modafinil and Phenibut stack? Should you use both of these drugs at the same time? Are there any side effects? Here is the full information. 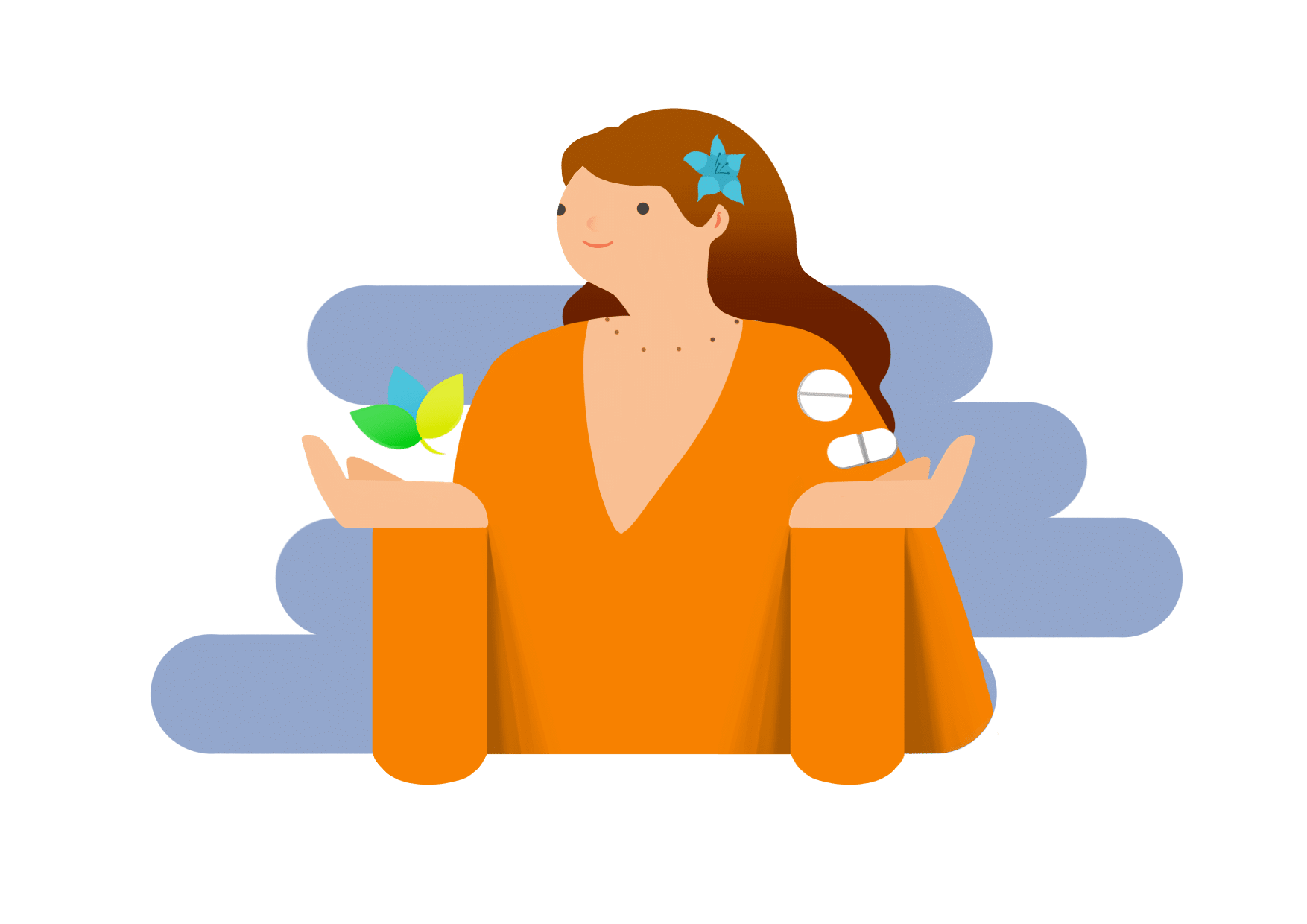 It’s a highly potent drug helping millions of people treat narcolepsy, shift work sleep disorder, and other excessive sleepiness due to obstructive sleep apnea or hypopnea syndrome (OSAHS). Modafinil belongs to a drug class known as wakefulness-promoting (or nootropic) agents . Its primary function helps trigger or stimulate some brain parts that control sleep and wakefulness. But that’s not all. Modafinil is also used as off-label med for recreational purposes. Most notably, it’s used as a cognitive enhancer (or brain stimulant) by activating cortical and subcortical areas in the brain [1].

That’s why it is sometimes called “smart drug”.

It’s widely used by professionals to equip them with alertness and concentration on specific tasks like studying and performing complex workloads that require attention and wakefulness, thus improving decision-making and planning skills. It’s a drug that comes with the fewest side effects or without them [2].

Modafinil functions by stimulating the brain. Its mechanism of action is not fully known, but it’s thought to increase the amount of dopamine in the brain by effectively lowering the reuptake of dopamine into nerves. By showing the antioxidative and neuroprotective effects, a rise in cortical creatine or a decrease in brain oxidation promotes vigilance. The end effect of this activity, caused by Modafinil, exerts neuroprotective and wake-promoting effects [3].

The Silicon Valley executives and professionals are tweaking their brains with the potency of this “smart drug” to keep them awake and concentrate on their complex tasks that require more brain power [4]. Why should sleepiness and a lack of creativity hinder you from releasing your full potential? Changing the world means dedicating oneself and sacrificing other basic necessities such as working longer hours while being productive for optimal work output.

While Modafinil is a wakefulness and cognitive enhancer, Phenibut is a popular nootropic agent used to reduce anxiety. Individuals use this med to help themselves enhance their sleep quality, memory, and cognitive performance. It’s the most used drug that exists in many nootropic stacks, particularly for memory, and other stacks designed to enhance an individual’s mood as well as reduce stress levels and anxiety. As a derivative of gamma-aminobutyric acid (GABA), Phenibut was first designed to treat post-traumatic stress disorder and several other problems such as insomnia, depression, and stuttering.

Phenibut attaches itself to two GABA receptors – GABAA and GABAB. It then stimulates the GABA neurotransmitter, resulting in the enhanced mood and stress levels when released (feelings of calm and relaxation). In essence, it stimulates the dopamine, which is a feel-good hormone, as well as beta-phenethylamine (PEA). There are both the prescription and off-label uses of this med. It’s about students, astronauts, professionals as well as factory workers who need to lower their levels of stress, anxiety and/or depression without hindering their performance on the job. Students use this drug particularly to boost their memory and cognitive performance when they are at the edge of big projects or exams.

It’s not clear how Modafinil works, but it’s known to affect several neural processes in the brain simultaneously, giving you the feeling of natural wakefulness – enhancing focus and quicker thought processes for better productivity. Phenibut, on the other hand, comes with several benefits, including anxiolytic, cardioprotective, ataractic, cognitive and neuroprotective. Its primary prescription is anxiolytic that is being in a state of lower levels of anxiety and stress. This effect puts an individual in a state of balance, calm, and worry-free experience. Here is a detailed comparison chart Modafinil vs Phenibut, depicting the difference as well as relations between them.

From the comparison chart, there are other recreational benefits and side effects resulting from the use of these drugs. More information is discussed below.

Combinations of meds may be beneficial or result in adverse effects. It’s necessary to always know which drug can interact negatively with another medicine. Modafinil plus Phenibut combination works very effectively provided that you stick to a prescribed plan. This combination is taken with a lot of considerations due to the reason that the use of Phenibut on a regular basis may lead to drug abuse (especially on recreational purposes). As a potent cognitive enhancer, Modafinil may also cause addiction. Here is the full information on both drug stack. Get to know what works and what doesn’t.

A combination of Modafinil and Phenibut is safe and productively, giving you the effects you need. It does not cause any interactions, and it is ideal for people who need to lower their anxiety while experiencing cognitive stimulation during work. Used recreationally, these drugs may lead to abuse. Modafinil is a powerful drug, and it’s necessary to take only the recommended dose strength or less. On the other hand, Phenibut is recommended to be taken once a week. Two tabs a week (or not more than 100 mg) still works fine, though. Excessive usage of Phenibut may lead to addiction or taking more than recommended, especially by individuals who need to intensify the high of the drug or to allow themselves to experience a quicker high.

The reason why most people combine Modafinil and Phenibut is due to added benefit the stack brings. Being a very powerful nootropic, Phenibut is well known to boost memory and improve stress levels. As Phenibut lowers anxiety, lifts mood, and free up mental energy, Modafinil is a potent wakefulness-promoting agent that greatly sharpens the concentration and performance, resulting in enhanced productivity. The effects of mixing Phenibut and Modafinil are long-lasting. It helps individuals move with increased vigor and vitality. People enjoy a significant boost in mood (due to euphoria or the feeling of persistent excitement) and find it extremely easy to power through workloads. With such benefits, however, these nootropics may potentially cause addiction, and regulating their usage is absolutely necessary. Using Modafinil and Phenibut stack may incur some additional side effects that come alongside the benefits. Negative reactions occur in the medical realm, and sometimes they are hard to avoid. Common side effects most people feel when they combine these meds include:

There are other drug interactions that you should be aware of. Drug precautions include administering a small portion of this stack if you are having renal and hepatic impairment. The other considerations before using this stack include:

There are other contraindications that a doctor should confirm to you before starting the treatment. It’s necessary to report to your medical specialist on any sign of a strange effect.

Among the other kinds of stress and anxiety-related states, Phenibut is used for alcohol withdrawal. Although it is beneficial as a GABA analog, there are some risks associated with it due to its availability. Being unregulated, there is no standard tab dosage guidelines or set rules to determine the safety and/or authenticity of both drugs. This poses a risk of the formation of dependence. It’s easy to develop tolerance as well as dependence on Modafinil and Phenibut. An individual may easily continue using higher doses to get quick results. And in some cases, being dependent and suddenly stopping using these drugs may make an individual go through withdrawal.

Withdrawal symptoms vary, ranging from barely detectable to severe. Rebound ones are some of the common withdrawal symptoms of using Phenibut. They can include anxiety, rapid heartbeat, and insomnia as well as the other changes in sleep patterns. For some people, Phenibut/Modafinil addiction withdrawal can be hard to cope with. Major symptoms of withdrawal is not an issue with Modafinil. This means that, although there might be minimal symptoms, Modafinil shows a lack of them [6]. Symptoms occur due to the brain being dependent on the effects of Modafinil or Phenibut use. A sudden taken away or stopping of the drug makes the brain struggle to readjust. The experience of brain readjustment is what creates withdrawal symptoms. Other withdrawal symptoms include:

These withdrawal effects can last for a week or two depending on dosage (including its duration), metabolism, organ function, the use of other supplements/drugs. The other symptoms, which are often called PAWS, can be long-lasting. It’s even possible for the effects to last for 24 weeks for high-dose Modafinil/Phenibut takers. It’s necessary to talk to a medical specialist if you are having trouble managing withdrawal symptoms of Modafinil/Phenibut.

What If Mix Such Combo of Drugs with Alcohol?

Mixing alcohol and a stack of Modafinil and Phenibut can lead to a variety of negative reactions, ranging from blackouts to notably increased alcohol tolerance. Alcohol and Modafinil have opposite effects on brain function/chemistry. Alcohol is known to boost the activity of the neurotransmitter GABA and reduce the action of glutamate. On the contrary, Modafinil is a GABA antagonist that lowers GABA production and raises glutamate production.

The effect resulting from combining these two active substances is a tug of war between incompatible neurotransmitters. That is, Modafinil stimulates brain function in one direction while alcohol depresses it in the opposite one. And the negative effects can be unpredictable – such as drowsiness and reduction of the effectiveness of Modafinil. On the other side, Phenibut, as a potentiate central nervous system depressant, can boost the effects of alcohol. This may result in mild to severe side effects such as nausea and vomiting as well as Phenibut’s hangover symptoms. The results of using Phenibut and alcohol together can make the withdrawal symptoms more severe and long-lasting.

Mixing with Another Nootropics

What other stacks can you mix with Modafinil? Several possible substances can be combined to provide peak performance or enhance the effects of this powerful nootropic. As depicted earlier, Modafinil has the power to boost an individual’s cognitive abilities, efficiency, and productivity. Its benefits include enhanced mood and alertness, reduced fatigue, increased motivation, better memory as well as improved reaction time. A combination of this substance with another nootropic can boost its potency. Here are some of the common Modafinil stacks that work very effectively:

The list is not complete. There are other stacks that work effectively to improve your cognitive ability while staying composed and collected. To stay healthy and limit reactions or interactions, try to understand the benefits, side effects as well as dosing schedule of the drugs you are using.

While our brain has the ability to function and stay focus and gives us the power to be more productive, there are situations where the dire need of these drugs come into play. Maybe you need to boost your cognitive processes or stay vigilant and awake because of something critical that demands attention and alertness. Modafinil is the safest drug that gives you the ultimate positive results if used effectively without abusing it. Taking too much can result in addiction as well as side effects, and it can incur additional withdrawal symptoms.

A combo of the aforementioned drugs has varying effects on individuals. Always use these substances with extra care and tracking of their performance. It’s necessary to consult a medical specialist before administering these tabs. Above all, take note of stack consequences such as negative effects and drug interactions.