Modafinil is used for various purposes: as a prescription to manage sleep disorders as well as an off-label cognitive enhancer to boost workflow and productivity. Wellbutrin is a drug used to manage depression problems. In this article, we cover in detail the effects of combining these two meds. 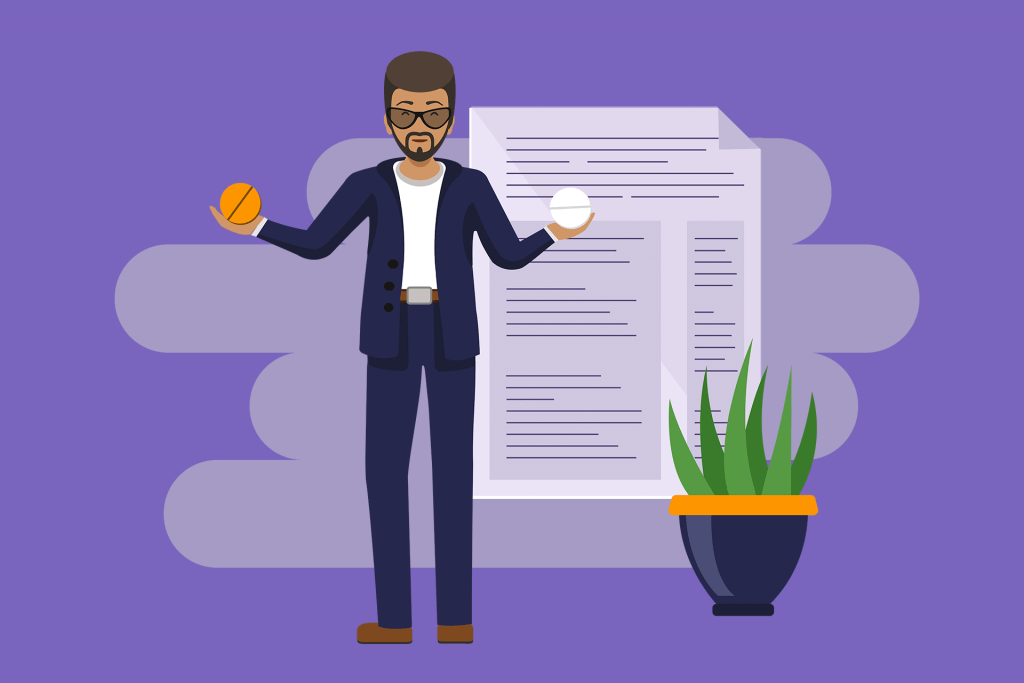 It is a comprehensive guide that introduces you to the drug differences, the safety of their combination, positive and negative effects of mixing these two drugs as well as interaction with alcohol.

Here is the full info. Let’s get started.

It’s the world’s first safest “smart drug” used for different purposes [1]. As a prescription, it is helpful in treating the following conditions:

There are other related conditions doctors can prescribe this drug for. It was approved by the FDA in 1998. Since then, doctors have been using it as the best choice to treat sleep problems or for eugeroic effects, including ADHD. It appears to also have the potential to treat depression [3].

However, by realizing the benefits this med brings to the workflow and productivity, among others, it’s been used by healthy individuals to boost cognition and become productive during the day or by people who need to stay up late to finish tough work projects.

Modafinil is also used in some countries to optimize performance while fatigued, especially by the military and astronauts, among others [4].

Furthermore, professionals such as CEOs and executives, especially from Silicon Valley, are using this “smart drug” to boost their productivity as well as to achieve a competitive edge and dominate competitions [5].

Modafinil is classified as a eugeroic drug. It’s a compound that enhances the neurological activity associated with wakefulness. As it inhibits sleepiness and as a highly potent drug, it actively works on specific receptors in the brain that control our waking state. By stimulating these regions, it makes us feel awake when we would otherwise feel sleepy as well as rewarding cognitive functions.

Wellbutrin (classed as an aminoketone) is also known as bupropion. It is an antidepressant used as a smoking cessation aid as well as used to combat depression. This med may also help treat methamphetamine dependence.

It can be administered alone or in combination with psychotherapy as the mainstay of major depressive disorder (MDD) treatment. The recommended dose is 200 mg per day. It can be increased to 300 mg (given as 100 mg 3 times daily, which can be taken at least 6 hours between successive doses).

As a second-generation antidepressant, its mechanism of action is different from most meds belonging to this drug class. Bupropion is a dopamine and norepinephrine reuptake inhibitor. 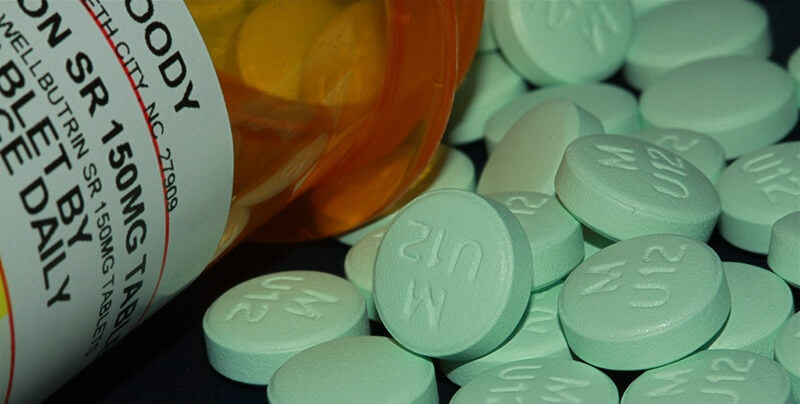 Its efficacy is at least similar to most other common antidepressants. It has a favorable acceptability and tolerability profile. Most importantly, this medicine has a minimal effect on sexual function as well as lower rates of weight gain compared to some other commonly used antidepressants [6].

As a norepinephrine-dopamine reuptake inhibitor (NDRI), this highly effective medicine boosts the levels of the neurotransmitters norepinephrine (noradrenaline and dopamine).

Moreover, being an antidepressant, Wellbutrin is an antagonist at nicotinic receptors. It works by blocking receptors where nicotine normally binds, thus becoming a useful agent in smoking cessation.

Difference Between Wellbutrin and Modafinil

Modafinil is a well-known drug used as a prescription as well as for other off-label purposes. Wellbutrin is a depression remedy and can be used for other reasons according to the doctor’s prescription.

Here is a table comparing modafinil and Wellbutrin.

This list does not provide the complete info on the difference between Wellbutrin vs modafinil. Drugs interact differently with other meds, and it’s necessary to consult a doctor before administering.

Can You Take Modafinil and Wellbutrin Together?

Modafinil off-label use includes the treatment of depression, ADHD, and drowsiness, among other purposes. Wellbutrin is a prescription for depression and major depressive disorder.

Can you take these medicines together? Some drug combinations can cause negative interactions and may harm your health. Precaution should come in handy as to whether these two medicines can be mixed together. Both drugs can be used to manage depression, but their combination can be even more effective in treating this condition.

Below is the full info on the effects of the drug combination.

Is This Combination Safe?

Modafinil is a non-sympathomimetic med with its pharmacological and chemical properties that differ from other central nervous system stimulants that enhance wakefulness. This medicine is thought effective in treating bipolar and unipolar depression.

Modafinil acts as an add-on remedy for major depression conditions. It is good news for many individuals whose antidepressants offer little or no relief [9].

A combination with Wellbutrin is safe and highly effective. Prior to coadministering, seek assistance from a medical specialist. Your health is paramount, and we recommend getting a doctor to assess your health before taking these meds. Note that drug interaction can occur depending on the state of your health.

According to a researcher, administering an antidepressant drug alone in combating depression does not benefit a higher percentage of depressed patients even if combined with psychological counseling.

Even if Wellbutrin drug alone works well, its residual symptoms such as trouble sleeping and fatigue pose risk factors for relapse. A combination of modafinil and Wellbutrin, versus the stand-alone treatment, shows much better results in managing the condition.

Modafinil has impressive actions, especially on neurotransmitter systems. Mixing it with traditional antidepressants such as SSRIs has beneficial effects on the major symptoms depressed patients undergo.

Depression may cause difficulty in functioning at work. This condition is a major cause of low productivity (the patient being not as productive as before) and absenteeism (particularly due to sick leave). Treatment with modafinil has positive effects such as increased concentration, focus, decreased fatigue and sleepiness (promote wakefulness) [10].

Based on the two-drug combination, there are no reported side effects according to the limited clinical research. This does not mean they may not occur. Depending on your health, you should not experience major negative reactions if your health is in a good state.

A combination of Wellbutrin and modafinil can worsen some conditions such as liver problems, hypertension, cardiac disease (or heart problems), and seizure disorders, among others.

Letting a doctor assess your health is paramount. Once under prescription, fully comply with the doctor’s advice and what is prescribed for your health condition. In case of any side effect or strange health issues while under this medication, seek assistance from a medical specialist. 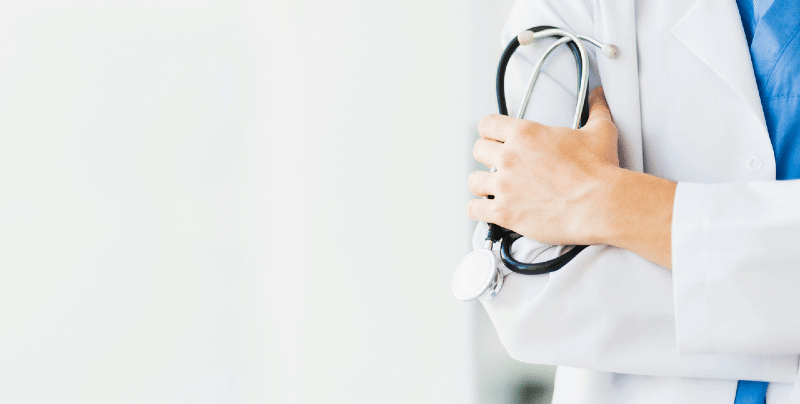 While a drug combination of modafinil and Wellbutrin is well tolerated and highly effective, it can pose risks of the development of dependence. It’s easy to form tolerance as well as dependence when treating depression or major depressive disorder.

Depending on the patient’s health, modafinil has very little or no withdrawal effects [11].

Without adhering to the doctor’s prescription, an individual may continue using higher doses of modafinil alongside Wellbutrin in order to experience improved effects. Nonetheless, the research depicts that lower doses of modafinil used in combination with the right dose of bupropion can effectively treat depression as well as other related conditions without causing major negative effects.

Being dependent on these meds and suddenly discontinuing using them make the patient go through withdrawal symptoms. If you are considering stopping this drug mix (maybe because it isn’t working or it worked and you feel better), you must know what to expect if you discontinue treatment.

Withdrawal symptoms vary from individual to individual. The effects can occur due to the brain struggling to readjust. SSRIs play an important role in several parts of your body system. There might be other different withdrawal symptoms depending on the patient’s health, metabolism, age, organ function, duration of taking the drug mix as well as modafinil/Wellbutrin dosage levels, among other factors.

Withdrawal symptoms can occur due to antidepressant treatment cessation [12]. If you need to discontinue using these meds, we recommend a slow taper of the drug mix (modafinil plus antidepressant).

Interaction of Modafinil Plus Wellbutrin with Alcohol

Negative interaction between the two drugs and alcohol can exist. Modafinil alone has no known interaction with this substance. But, depending on the use of modafinil and how you take alcohol, possible issues may still arise.

Wellbutrin (bupropion) interacts with alcohol in a negative way and may increase the risk of severe or uncommon negative effects such as hallucinations, paranoia, seizures, anxiety, delusions, mood and behavioral changes, panic attacks, depression, and suicidal thoughts.

Avoid or limit the use of alcohol while under this mix. If you frequently take alcohol, it’s necessary to talk with your medical specialist [13]. 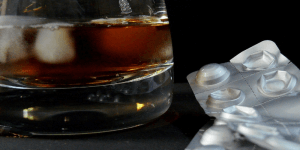 Depression affects about 121 million people globally. The World Health Organization (WHO) estimates this condition to be the second leading cause of disability globally by 2020 [14].

Drug combination should be administered with precautions. While the mix of modafinil and Wellbutrin is well tolerated and highly effective in combating depression and other related health conditions, it’s necessary to consult with a medical specialist to assess your health before prescribing you the right drug combination.