Weed is a complicated plant.

It can be both a stimulant or a depressant, a productivity enhancer or a productivity killer, and it can help us with symptoms like anxiety or make them even worse.

The trick to getting it right is to choose the right strain. Every type of weed is different and will give you different effects.

Your weed can either help your modafinil use or hurt it.

This guide aims to break the barriers and help you understand exactly how to mix weed with modafinil effectively.

We also talk about some tricks to avoid the negative side effects associated with these substances.

There are many reasons why someone would want to combine weed and modafinil.

The most common reason is to reduce some of the side effects of modafinil. Others use it to boost the concentration and creativity-enhancing effects of the modafinil further.

Others mix them indirectly by taking modafinil for work or school during the day— followed by a few hits of weed later on to relax.

Is mixing modafinil and weed dangerous?

We’ll discuss this in more detail below.

A Primer on How Modafinil Works

In order to break down how weed and modafinil mix, we need to briefly go over how modafinil actually works.

Modafinil is a synthetic, isolated chemical. 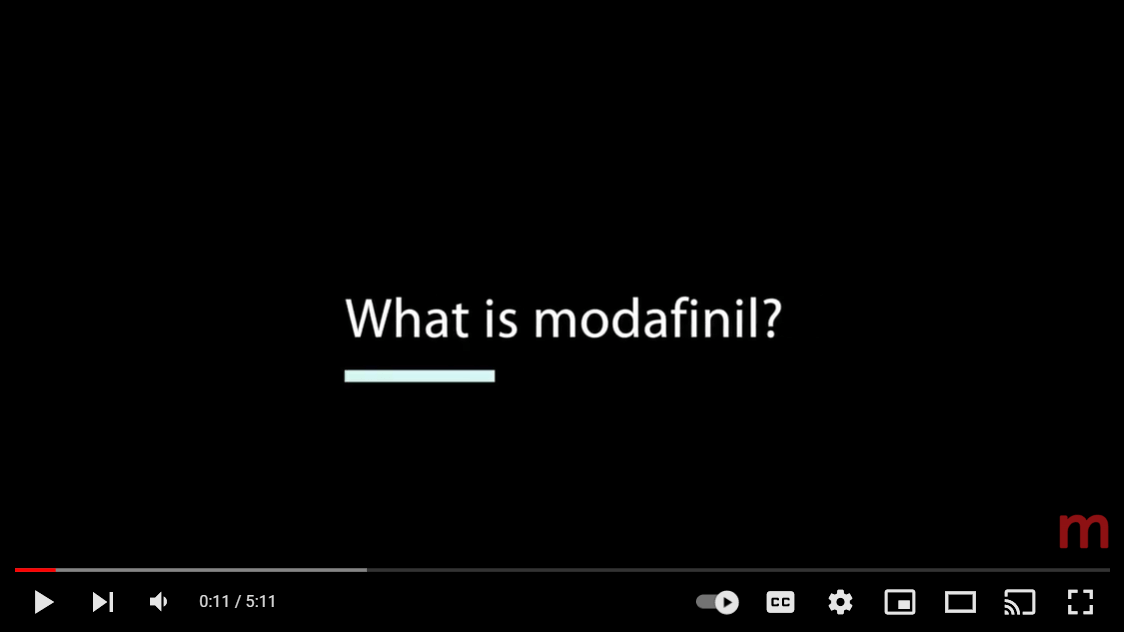 It has several distinct effects on the human body that force the brain into a waking state.

The Effects of Modafinil Include:

The sum of these effects makes us feel very awake while the drug is in effect. This can last up to 20 hours depending on the dose and the size/build of the person taking it.

The reason this is so useful for increasing productivity is that it can dramatically increase the amount of productive time we have available to work on a given task. It also helps us focus on the task at hand and avoid distractions.

How we Metabolize Modafinil

From the moment modafinil enters the bloodstream, the liver begins to metabolize it (primarily through CYP3A4 enzyme species).

It converts the active compound into an inactive, water-soluble version known as modafinilic acid. The kidneys then filter this metabolite out and eliminate it through our urine. 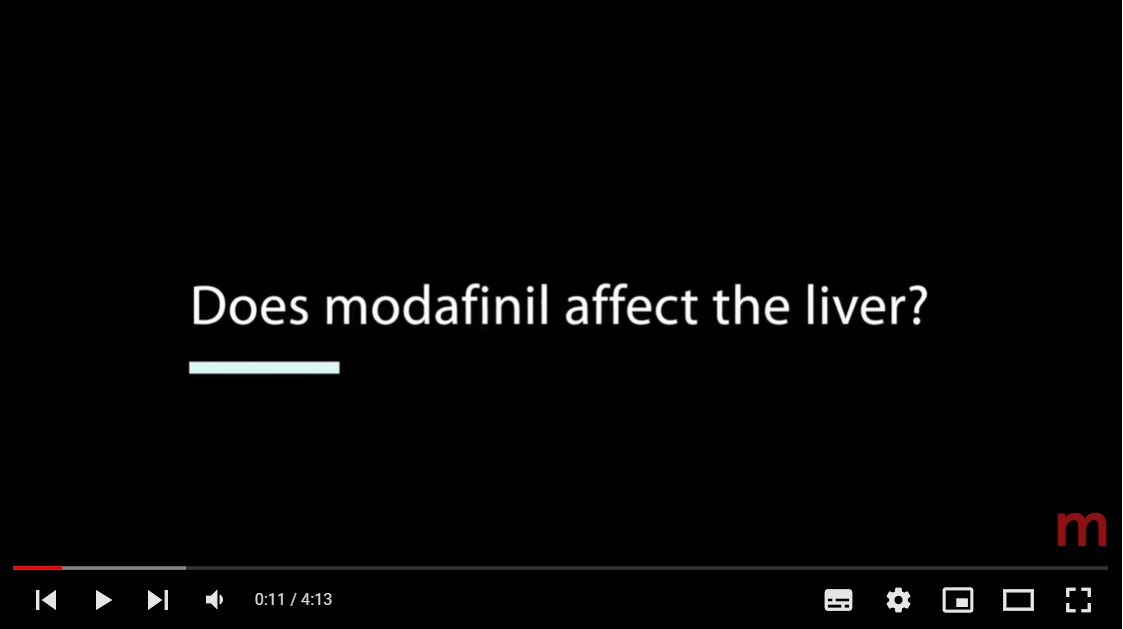 A Primer on Weed (Cannabis spp.)

The active compounds in weed are known as cannabinoids.

Cannabinoids from the marijuana plant bind to these receptors, and activate them, to varying strengths.

The most significant cannabinoids in the plant are THC and CBD. Each one has different effects on the body.

Although marijuana plants can have highly variable THC levels, Sativa-dominant hybrid strains generally have a higher THC content than other cannabinoids.

You can also buy pure THC or have weed extracts that contain mostly THC.

The weed that’s high in THC is often described as producing a “head high” and can cause side effects like anxiety, paranoia, and insomnia.

Strains high in THC are better for complimenting the stimulating effects of the modafinil, reducing the appetite-suppressing side effects of the drug, and for recovering from an uncomfortable come-down off the drug’s effects.

CBD has a more sedating effect than THC.

It’s not psychoactive but offers most of the pain-relieving, sedating anti-anxiety, and muscle relaxing benefits of the plant.

Therefore, weed strains high in CBD are better for reducing modafinil side effects like anxiety, muscle tension, headaches, and insomnia.

Indica dominant hybrid strains of marijuana are more likely to have higher CBD ratios than their Sativa counterparts.

There are— of course— exceptions to this rule.

It’s best to look at the cannabinoid profile of each strain you aim to buy rather than just assuming all Indicas will do the trick.

CBD extracts are also available and maybe the best option if your goal for mixing your modafinil with weed is for the benefits of CBD specifically.

We recommend finding a good Indica-dominant strain high in CBD to receive these benefits. It’s best to combine this form of cannabis later on as the effects of modafinil start to wind down from the halfway point.

How to Mix Modafinil & Weed Effectively

1. Using Weed to Reduce the Side Effects of Modafinil

This is likely to be the most common reason behind mixing these two compounds.

Modafinil is a powerful psychotropic drug that stimulates parts of the brain associated with the process of wakefulness. It increases neurochemical concentrations of norepinephrine, dopamine, histamine, and orexin, all of which work together to make us feel awake and focused.

As with any powerful medication, some unfortunate side effects may arise.

Weed (Cannabis indica/Sativa) offers some unique benefits that can reduce many of these side effects.

It’s important to note, however, that these benefits are highly dependant on the specific strain chosen due to the high variability of the phytochemicals in the cannabis plant.

As mentioned above, the main two cannabinoids in the marijuana plant are THC and CBD. Both of these cannabinoids will provide different benefits and different side effects.

How to Use Weed for Lowering Side Effects of Modafinil

As you can probably see, it’s not as straightforward as merely mixing your weed with modafinil to eliminate the side effects of your Modafinil. If the wrong strain is chosen, it may be ineffective or make side effects even worse.

That’s why it’s important to identify what side effects you want to reduce.

If you find modafinil is making you feel overstimulated, try a lower dose. A strain higher in CBD might have the potential in alleviating this side-effect as well.

You can find strains known to be high in CBD through tools like Leafly.com. Your local dispensary will also likely have a good knowledge of what strains are higher in THC or CBD.

We recommend Cannatonic, or Harle Tsu if you’re not sure where to start.

If you find most of the issues with modafinil involve the comedown (feeling depressed, tired, uncomfortable), then we recommend using something more balanced or with a higher THC content (though not too high).

Aim for something with around 10-20% THC, or purchase an extract with medium THC levels and lower CBD.

We recommend Chocolope or Banana Kush for these effects.

2. Using Weed to Boost the Effects of Modafinil

Some users are mixing weed and modafinil to boost the effects of their modafinil.

Although these two compounds are very different and have separate effects on the body, some weed strains offer a similar benefit to modafinil through different mechanisms.

It can be a good way to get some extra kick out of your modafinil doses.

Use caution when mixing weed and modafinil for this reason. These two compounds can easily cause overstimulation resulting in negative side-effects like anxiety and insomnia— so approach with caution.

One of the main ways THC can be used to boost modafinil’s effects is through one of the main endocannabinoid receptors, known as CB1.

This receptor is important for regulating dopamine release.

THC preserves dopamine levels by inhibiting the enzyme responsible for breaking it down (monoamine oxidase) [1]. It also works to increase the release of dopamine by activating the CB1 receptor in the brain [5].

How To Boost Modafinil’s Effects With Weed

The main stimulatory compound in marijuana is THC.

We recommend finding a weed strain with a moderate-high THC content for these effects.

It’s important to remain conservative with your dosing when mixing a stimulating, high-THC strain of weed with your modafinil. Start with doses that you are familiar with for modafinil. For most people, this is around 200 mg.

Add the weed in slowly. It can help to take weed or weed extracts AFTER the modafinil has peaked, roughly around the 3 or 4-hour mark.

If you’re not sure where to start, we recommend Chemdawg, Jack Herer, or Durban Poison as a place to start.

Many modafinil users also enjoy weed from time to time outside the effects of modafinil.

After taking modafinil during the day, you may choose to settle down with some marijuana in the evening. What many people aren’t aware of, is the fact that there is still likely to be modafinil floating around the bloodstream. This will then interact with the compounds in marijuana even if you didn’t intend for them to mix.

If you’re reading this to find out if it’s safe to combine weed and modafinil, the short answer is yes, but with some caveats.

As mentioned in other sections, the interaction between modafinil and weed is highly variable. It can either make the side effects of the modafinil worse or improve them.

It all depends on the weed strain you use and how much CBD, THC, or other cannabinoids are present in the leaves/flowers.

Understanding the potential interactions is important if you wish to consume modafinil and weed on the same day.

The best way to combine these two compounds is to ensure that your modafinil is taken very early in the morning.

This allows as much of it as possible to be eliminated from the body by the time you sit down to roll up a joint or hit the vape.

Keep in mind what you’re using marijuana for in the first place. If you use it to help you relax after a stimulating day on modafinil, look for a strain with well-known muscle relaxant and sedative qualities.

If you’re looking for the psychoactive qualities of the herb, try using something that is a little more well-rounded, and avoid the high-THC strains.

A few good, well-rounded strains suitable for use with modafinil include Chernobyl, Maui Wowie, or Jack Herer.

Now that we know why someone would want to mix weed with modafinil and how to combine them to get the results you’re looking for, you may be wondering, “is mixing modafinil and weed safe?”

A group of researchers set out to find the answer to this question with a study that was published in 2010.

All 12 participants were given all combinations four times. They were not told which combination they were receiving each time.

Researchers conducting the study concluded that “modafinil can be safely combined with oral THC” [6].

There have not yet been any comprehensive studies involving raw cannabis or CBD extracts in combination with modafinil, but it is unlikely for there to be any negative interactions. 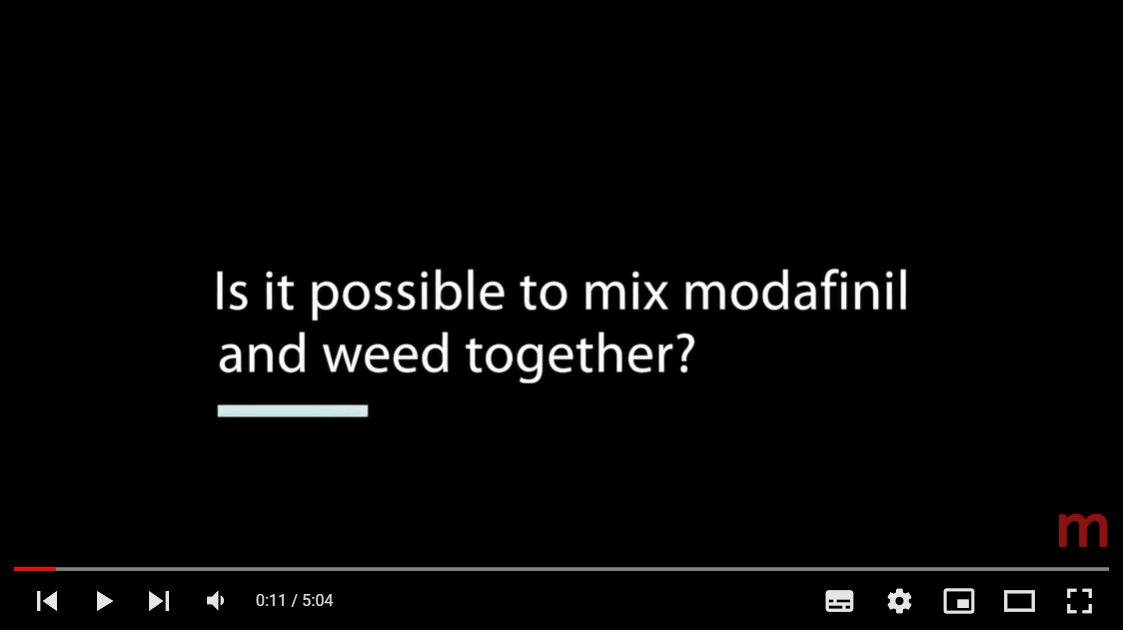 In summary, modafinil and weed can be combined, and in many ways the combination is beneficial.

However, it’s important to choose the strain cautiously, and understand what your goals are for mixing.

Looking to give your modafinil a boost? — choose something high in THC.

Do you want to buy modafnil at a cheap price online? Then we advise you to consider primarily Indian manufacturers with an impeccable reputation.

Looking for a seller?
Locate the best modafinil vendor
📔 Informational