Home > 📔 Informational > Modvigil vs. Modalert: Which Modafinil Drug Is Better?

Modvigil vs. Modalert: Which Modafinil Drug Is Better?

Modvigil and Modalert are generic versions of the drug Modafinil. In short, they are chemically identical, but they are produced by different pharmaceutical companies and marketed under different names. Both drugs increase alertness and promote sustained mental focus, though users report subtle differences. Dosage recommendations are similar. Side effects tend to be minor for both but rarely, can be serious. Modafinil is a controlled substance; however, both Modvigil and Modalert can be discreetly purchased online in most countries. 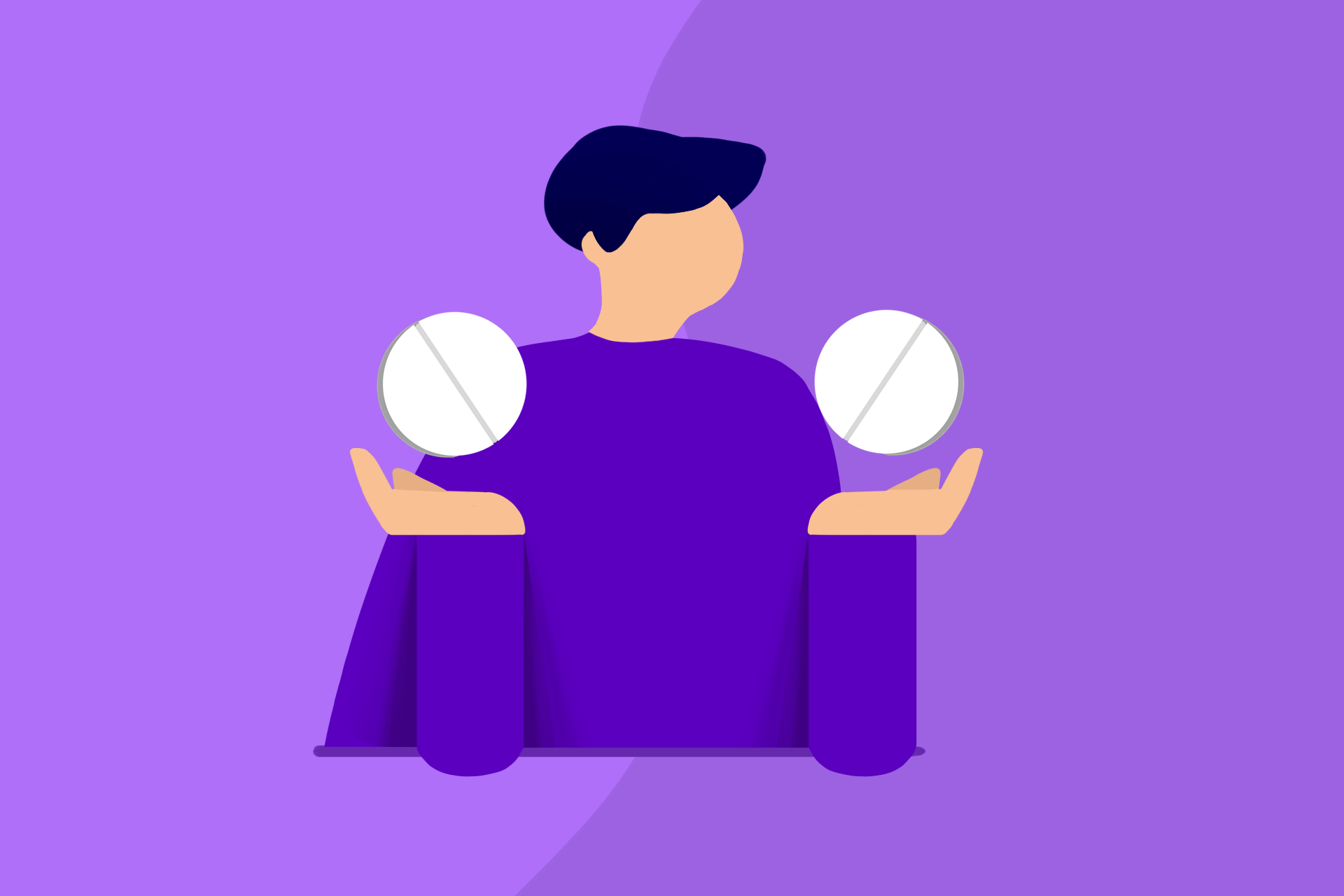 Modvigil is a cheap generic of modafinil drug, brand name Provigil®, offering an affordable way to experience the cognitive and productivity-enhancing benefits of modafinil. It is manufactured in India by HAB Pharma, a privately held company. Some in the nootropics community express concern that the company’s business structure lacks transparency and allows the company to withhold certain information about its production and quality tests from the public. However, Modvigil remains a popular modafinil product that is widely used and available through most online modafinil resale companies.

Many Modvigil users find that this modafinil product has slightly greater arousal and wakefulness effects than other modafinil products, making it the go-to product for many who are looking for a performance edge that will provide added endurance, for example, to stay productive through an extra-long shift or remain alert through a long-distance drive. Modvigil has also found wide use as a sports performance-enhancing drug [1].

Modafinil’s wakefulness-promoting effects also contribute toward improving focus, concentration, and cognition [2]. In school and at work, users report that modafinil helps them stay on task longer and with greater focus, allowing them to complete their work faster and with greater accuracy.

If you would like to learn more about modafinil from users and fans of the drug a dedicated modafinil discussion group with 16.0k members awaits you on Reddit.

Modvigil is available in 100mg and 200mg doses. The second dose is more popular. Also, you can easily divide it and take 50mg or 150mg if needed.

Modalert is the most widely used generic form of modafinil. It is manufactured in India by Sun Pharmaceuticals, a prominent, publicly-traded pharmaceutical company established in 1983, with state-of-the-art research and manufacturing facilities and worldwide reach.

Some Modalert users report that Modalert provides better concentration and memory-boosting benefits than other modafinil generics, making it more effective for studying; however, official studies have not been conducted to confirm these reports.

Modalert is available in 100 mg, 200 mg, and 400 mg tablets. The 200 mg dose is considered the standard dose and is most versatile in that it can be easily divided to customize the dose to your individual needs. For this purpose, all tablets are scored down the center with an indented line so the tablet can be easily and accurately halved.

When making a comparison between Modvigil versus Modalert it’s important to keep in mind that both drugs contain modafinil as the active ingredient and therefore have the same actions in the brain and body and can be used for the same purposes. That is both increase activity of dopamine, norepinephrine, and histamine. Both also increase levels of the wakefulness-promoting compound orexin.

That said since both drugs are produced by different pharmaceutical companies, there is a slight difference between the two in their manufacturing process. They also vary slightly in the composition of stabilizers, additives, or non-active excipients present. As a result, these variables can cause subtle differences between the two.

See the chart below for information on Modvigil and Modalert:

Users’ subjective reports indicate that Modalert is stronger than Modvigil and may provide a slightly better edge on focus, concentration, memory, and learning, which implies that Modalert may exert greater dopamine promoting effects. Modvigil, on the other hand, is considered to be weaker and therefore, may be preferable if your intention is to use modafinil on an ongoing basis. Both drugs are said to have the same mood-boosting effects.

Where to Buy Generic Modafinil Tablets Without Rx?

Drugs in this category must meet the following three criteria:

Generally, schedule IV drugs such as modafinil must be prescribed by a physician. That said, generic modafinil is widely available online, but in order to obtain it online it’s important to know the laws where you reside, as its legal status – and the way those laws are upheld – varies from one country to another.

For example, at one end of the spectrum are countries, such as China, Japan, and the United Arab Emirates, which strictly enforce laws prohibiting the online purchase of modafinil. In stark contrast is Thailand’s policy, which allows the drug to be readily purchased without a prescription and in unlimited quantities.

Other countries occupy what could be described as a happy middle ground with regard to the purchase of modafinil without a prescription. These include the United States, the United Kingdom, Europe, Australia, and New Zealand. In these jurisdictions modafinil is only available by prescription; however, it is possible to purchase generic modafinil online, provided that your purchase is for personal use.

If you endeavor to purchase Modvigil and/or Modalert online without a prescription, we offer below a list of our recommended pharmacies:

Since the start of operations in 2014, this relative newcomer has risen to become the best source of Modalert for the US, the UK, Australia, and NZ customers. They also ship to Asia and Europe. ModafinilXL offers a range of both modafinil and armodafinil products at competitive prices, with free samples and discounts for minimum orders and cryptocurrency payment. Orders are safely and discreetly packaged and 99.7% successfully pass through customs and arrive at their destinations, according to the company website.

The only American-owned and operated modafinil business in existence. Only sells from original manufacturers Sun Pharma and HAB Pharma. BMO the best source of Modalert for Canadian customers, as other vendors have been discouraged from shipping to Canada due to high rates of confiscations. Delivery in 7–12 business days, though now averaging 3–6 weeks for delivery due to pandemic.

This company sells a wide variety of drugs in addition to nootropics and only sells Food and Drug Administration-approved drugs. They advertise the world’s lowest prices and a variety of discount and bonus product options. Express shipping is free worldwide in 5-14 days on nootropic orders only. 24-hour support is available. Afinil does not offer refunds or reshipments for some countries due to strict customs regulations.

Sells exclusively modafinil products direct sourced from the manufacturer. FoxDose offers free international shipping. Orders are processed using dedicated data-encrypted servers. Their 20% discount for Bitcoin payment is the highest among the companies reviewed here. An affiliate program is available through the company.

As a certified Sun Pharma and HAB Pharma distributor in business for over 20 years, Eufinil has a well-earned reputation for quality products and services. They are the best source of Modvigil for European customers. The company ships only within Europe from state-of-the-art warehousing facilities in Spain. It provides a 100% refund guarantee. Donates 10% of profits to narcolepsy and ADHD charities. The company also offers an affiliate program with competitive rates.

Dinosupplies sells modafinil and armodafinil products exclusively. Their narrow focus helps them achieve their stated goal of providing “…a reliable source of quality nootropics at a reasonable price.” Low-price sample packs are available. 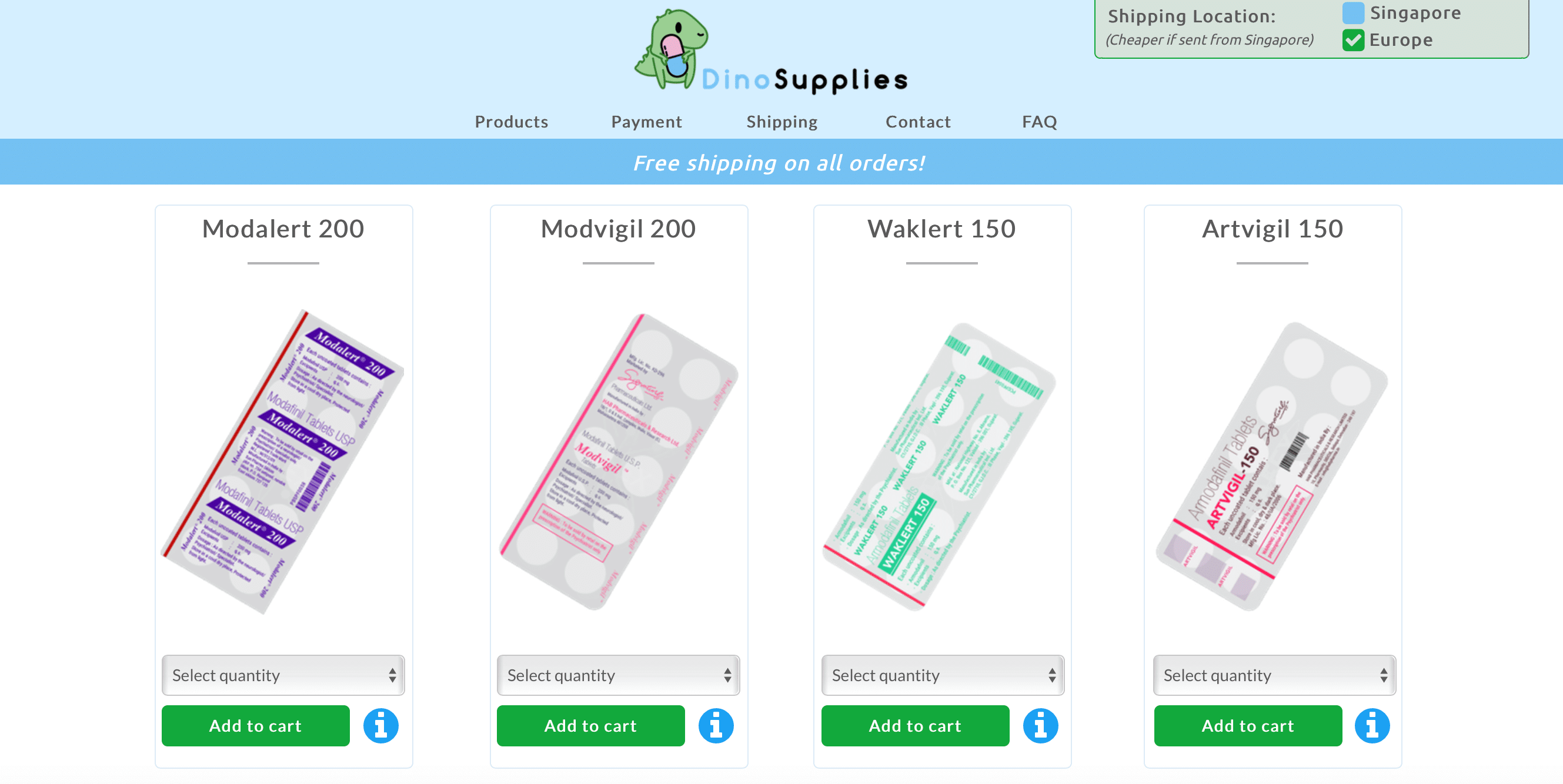 Credit and debit card payments can be processed through Switchere, a cryptocurrency gateway, for which they offer a 20% discount. Note: The company has temporarily discontinued shipping to some countries due to COVID-19.

Sells modafinil and armodafinil drugs exclusively. ModaRapid aims to make the customer their king and boasts a 4.8/5 rating on Trustpilot.com as proof. They ship most weekends and provide a full reshipment guarantee if your order is seized by customs. While they maintain a relatively high minimum order of 100 tabs they also offer the lowest price for large bulk orders of Modvigil among the companies reviewed here.

Following is a convenient table with quick and easy, side-by-side comparisons of product offerings, prices, shipping, and other useful information:

Safe Dosage of Modvigil vs Modalert

Most people find that one 200 mg tablet once per day is an effective dose of either Modvigil or Modalert. However, you may want to start out with a lower dose at first to gauge your response and gradually increase or decrease to find the optimal safe dose for you. It is advisable not to exceed 400 mg per dose of either drug.

What About Their Side Effects?

The side effect profile of the two medications is essentially the same. Side effects of modafinil are usually minor self-resolving. These may include:

Some side effects may be lessened or avoided by accompanying each dose with a large glass of water.

Rarely, serious side effects have been known to occur from modafinil use. These require medical attention. They include:

Of note, allergic reactions to modafinil can occur, particularly in response to inactive ingredients used in the manufacturing process. These ingredients may vary from one product or manufacturer to another and may include one or more of the following: lactose monohydrate, microcrystalline cellulose, pregelatinized starch, croscarmellose sodium, povidone, and magnesium stearate. Such allergic reactions have been known to affect the liver or blood cells and can be life-threatening [4].

Modvigil and Modalert can be taken either with food or on an empty stomach, so feel free to experiment with each to see how the presence or absence of food changes the amount of time it takes for the drug to take effect, the level of overall effectiveness and/or any side effects that you experience.

Finally, if you are new to modafinil a good way to stay safe while getting acquainted with this drug is to start with a low dose, such as 50mg or 100mg, to experience how your body responds and head off any potential side effects. Gradually increase your dose until you find the amount that works best for your needs.

Are Modalert vs Modvigil Interactions Different?

If you currently take any prescription medications it is important to rule out potential drug-drug interactions before starting on modafinil [5].

Minor interactions may occur with some foods, though no such information has been made available to the public, to date [6]. These effects would be the same regarding the modafinil component of both Modvigil and Modalert but may vary between the two according to the different stabilizers and other inactive ingredients in each product.

Modafinil is a central nervous system stimulant and should not be consumed with alcohol, which is a central nervous system depressant; therefore, neither Modvigil nor Modalert should be consumed with alcohol. The appetite-suppressant effect of modafinil can cause more rapid intoxication from combining the two since alcohol is absorbed faster on an empty stomach. Additionally, both drugs have dehydrating effects, which can be compounded if they are combined. Before taking any of them, better consult with a doctor.

Modvigil and Modalert are popular generic versions of the modafinil, a drug that enhances alertness and mental acuity by increasing the activity of dopamine, norepinephrine, histamine, and orexin in the brain.

Modvigil is regarded as being slightly less potent of the two and therefore more appropriate for long-term use. Modalert is said to have slightly greater effects on focus, concentration, memory, and learning. Modafinil may cause a range of potential side effects, some minor and others serious or potentially life-threatening. Additionally, modafinil interacts with a number of common drugs. Users should be aware of these interactions and avoid taking Modvigil and Modalert with any of these drugs.

The standard dosage of both Modvigil and Modalert is 200mg. Both drugs are manufactured in India by different companies and shipped throughout the world. Modafinil is classified as a schedule IV controlled substance; however, many countries allow purchase online without a prescription provided the purchase is for personal use. There are a number of reputable online resellers of Modvigil and Modalert, some of which specialize in shipping to particular locales.